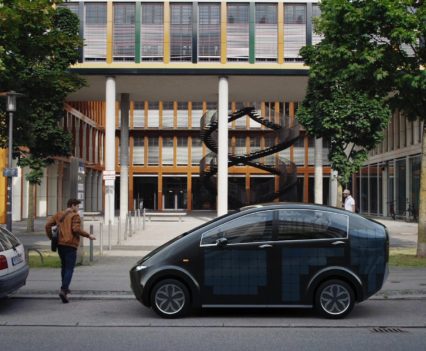 Transitioning from petrol-fuelled cars to electric vehicles is widely predicted to happen over the course of the next 10 to 20 years. However, a new German startup called Sono Motors is already exploring technology that could take that transition one step further – the potential for a solar-powered electric vehicle that can travel just under 20 miles per day using energy directly from the sun alone.

90% of today’s car journeys could be undertaken by EVs, whose range capacities are increasing all the time, according to recent research. 18 miles per day isn’t going to be enough for a lot of drivers, but in Germany, the average driver travels only 13 miles per day, which means that Sono Motors’ Sion is already relevant to the marketplace, and of course the car can be plugged-in to a regular electric charger. With planed test drives in the first half of 2017, the car is expected to be extremely affordable, currently valued at $13,000 – plus the expense of renting or buying the battery.

Design for repairability has also been factored in as part of a simple design, and Sono Motors even intends to provide instructional videos to help enable drivers to repair parts and components themselves.
In a context where the average European car spends more than 90% of its time parked at either people’s homes or offices, Sono Motors are exploiting an opportunity utilising that time to capture valuable energy. Considering the potential that this technology has demonstrated at an early stage of development, there’s reason to be optimistic that this could play a role in the mobility picture moving forward.
Source: This solar car charges itself while parked on the street

The post One step beyond electric: Self-charging solar cars appeared first on Circulate.