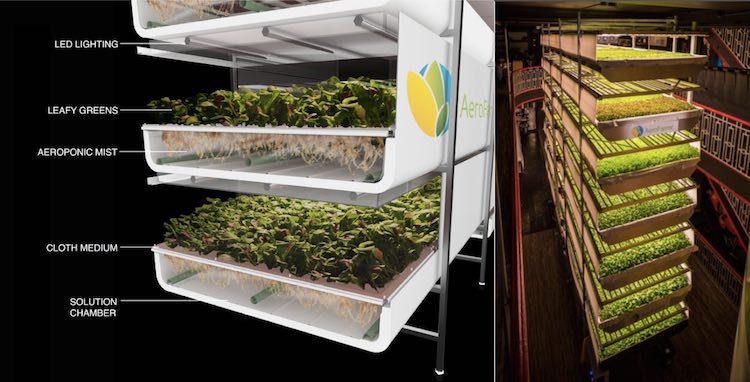 Is this how urban farming reaches scale?

Two million pounds of fresh produce, including salads, potatoes and herbs, are grown and distributed to the New Jersey and New York City area each year from AeroFarms’ Newark facility. However, instead of open fields, soil, sunlight and large quantities of water, this facility demonstrates aeroponics at scale, and is beginning to be viewed by many as a potential model for the future of urban farming.

Shelf-like bins house the crops, while LED lights replace sunlight and reusable fabric extracted from recycled bottles replace soil. Pesticides, fungicides and herbicides are not required, while the need for fertiliser is reduced by 50%.

Staggering crops throughout the year and the ability to grow in tight spaces have been critical to the high levels of production achieved; they switch between 22 different crops featuring nearly 250 varieties of fruit and vegetables during the year, all while growing 70 times more per square foot compared against other methods.

In many ways, aeroponics as a technique is a direct response to the modern context, where space is becoming more limited, awareness of water finiteness is increasing and a large (increasing) percentage of the global population lives in cities.

There are a growing number of examples of innovators experimenting with the possibilities of urban farming. However, there are very few projects that have achieved the scale and commercial success of AeroFarms.

Of course, even this method isn’t free of questions. For some, the prospect of a future where large quantities of crops are grown without any natural sunlight is unpalatable and there may be unknown issues caused by that disconnection, though it’s worth noting that the technology has existed for some time and has been thoroughly tested.

However, there’s no question that the global food system needs innovation and this solution is one of those that offers the most promise, particularly from the perspective of being able to grow the volumes of food needed to supply modern cities.

The post Is this how urban farming reaches scale? appeared first on Circulate.