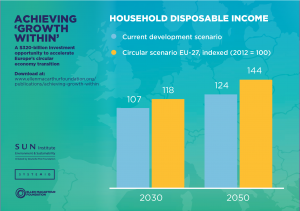 Is this how Europe realises its circular economy potential?

Has European innovation dried up? Back in 2010, the EU set itself a target for 3% of GDP to be invested in R&D by 2020. According to the latest update, the European economy has some way to go: investment hovers at around the 2% mark. Could the circular economy offer businesses and governments the path to a new, regenerative growth model?

According to the new report Achieving Growth Within, released in Davos last week, an additional €320 billion of circular economy investment opportunities could be unlocked through modest political and business action in the European Union (EU) until 2025.  The research, released by SystemIQ in collaboration with the Ellen MacArthur Foundation, identifies the investment needed to realise the €1.8tr opportunity found in Growth Within, which was published at the European Commission in June 2015. It showcases 10 key themes for investment including integrated mobility, circular cars, indoor farms, developing new protein sources and closing material loops in buildings.

The European economy currently captures just five per cent of the original value of the raw materials it uses, according to the initial Growth Within report. Written in the context of the European Commission’s much-discussed circular economy package, the research revealed that combining circular economy principles with the impending technology revolution could help to create a net benefit of €1.8tr by 2030, twice the calculated benefits of the current path, and would be accompanied by better social outcomes with the average EU household projected to be €3000 better off.

Further benefits were also found, including an 11 per cent GDP increase, compared with four per cent in the business-as-usual scenario, and the potential to halve carbon dioxide emissions in Europe relative to today’s levels. Primary material consumption measured by car and construction materials, real estate land, synthetic fertiliser, pesticides, agricultural water use, fuels and non-renewable electricity could drop 32 per cent by 2030 and 53 per cent by 2050 compared with today.

At the core of Growth Within is a paradigm shift where maximising the use of assets become the point of focus. Businesses have already begun to seize the opportunities related to the circular economy, but perhaps one of the key remaining questions left unanswered by the 2015 report was, how does this reach scale?

That’s where Achieving Growth Within picks up the story. The study explores how, in an era characterised by sluggish post-crisis recovery and stagnant industrial investment in Europe, a circular economy could be a source of innovation, industrial renewal and investment opportunities.

European investors are looking for attractive propositions with positive medium term prospects to place their money, while also undoubtedly being aware of the risks of stranded assets in sectors like the fossil fuel industry with questionable long-term prospects. Meanwhile, innovators and businesses who are taking advantage of the opportunities in a new economy need investment to reach scale and the market – it’s a potential win-win and this report highlights 10 key areas, across three focus sectors in food, mobility and built environment, where there are significant opportunities.

The report highlights the relevance of each theme, recent developments, opportunities identified, case studies of businesses already in operation, existing barriers and potential interventions from policy makers and business. Based on their analysis, SystemIQ estimates the size of the investment opportunity and potential economic benefit. For example, moving to the design and production of fully circular cars could create an industry based on more durable vehicles, the looping of component and material flows, and reducing negative impacts, potentially leveraging robotics, 3D printing, lightweight materials and material tracking. “Circular cars” could be achieved with an investment of up to €35bn between now and 2025 and could put the EU on a pathway to realise a total cost benefits of €75bn per annum by 2030 driven by reduced material costs and a smaller car fleet.

In total, a €135bn investment opportunity was uncovered for integrated mobility, circular cars and more effective vehicle manufacturing, while regenerative agriculture, urban indoor farms and new protein sources could contribute to a €70bn opportunity for investors in the food sector, and the total potential for investment in the built environment was calculated at €115bn, taking into account design of modular, multi-use buildings, boosting material reuse and integrating circular economy principles into urban design.

Achieving Growth Within represents a fundamental shift in the circular economy conversation in Europe, a transition from identifying opportunities and making the case for the concept to the idea of exploring how to maximise the benefits of the shift as it happens.

Download and read the full Achieving Growth Within report.

The post Is this how Europe realises its circular economy potential? appeared first on Circulate.