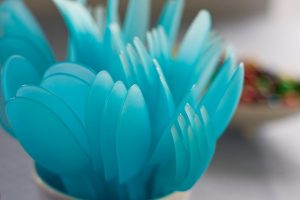 Edible cutlery as a replacement for plastics

Estimates suggest that in the U.S. alone, over 40 billion plastics utensils are used each year, most of which are consumed and thrown away, either to landfill or crushed and down-cycled into a lower grade of plastics. Indian cutlery company, called Bakeys, believes that it might have an innovative solution to this problem – cutlery you can eat.

The Ellen MacArthur Foundation’s New Plastics Economy report along with numerous other studies has highlighted that, while plastic is a vitally important material, it comes with a wide range of negative economic and environmental effects. 95% of the material value of plastic is lost after just one use and in a business-as-usual scenario it is predicted that the ocean will contain more plastic than fish by 2050.

Tackling this problem will require both a systemic perspective and individual innovations. That’s where Bakeys might just come in with a set of spoons made from rice, wheat and sorghum (the primary ingredient, an ancient grain with tough qualities).

The cutlery apparently tastes like a dry cracker, coming in three flavours – savoury, sweet and plain and will reportedly decompose in a couple of days even if not eaten or disposed of correctly, a favourable comparison after biodegradable corn plastic utensils, which need high heat and specialised composting facilities to be broken down.

Currently, Bakeys sells 1.5 million spoons each year, mostly to catering companies selling food at weddings and other large events. The most significant cost in terms of scaling up is cost. At the moment an edible spoon is priced at two rupees, which is cheaper than wooden cutlery, but more expensive than plastic.

The post Edible cutlery as a replacement for plastics appeared first on Circulate.