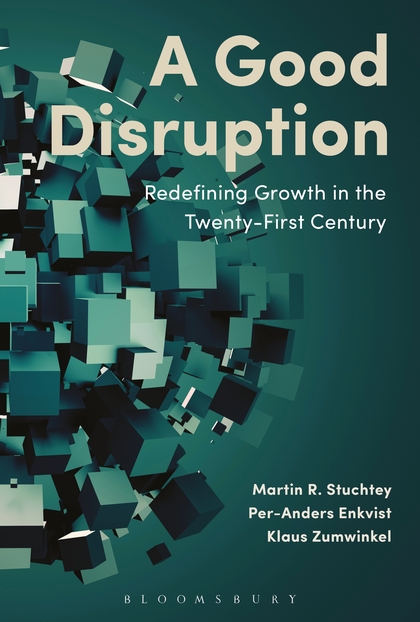 The last two decades represent one of the most prosperous growth periods in history. “Our current growth model has worked miracles, and has lifted billions out of poverty into rewarding and prosperous life (…) And most citizens of advanced economies today command goods and services that were beyond the reach of even kings and emperors only 200 years ago…”, as the authors of A Good Disruption like to point out. The path and scale of our global economic growth is staggering, and while it took about 150 years for the UK to double its GDP in the eighteenth century, the US achieved the same feat in only 50 years and China and India did it in 12 and 16 years respectively. The social developments that accompanied that dynamic are also impressive in terms of access to education, reduction of child mortality and improvements in sanitation across the world.

However, in the late twentieth century, a number of indicators started to take a different turn. Scientists, government officials, students and business leaders started to question a system that “is spurring inequality, anxiety and popular backlash and is broadly at odds with our social vision, the planet and our concept of good life”, say the authors.

In a context of financial crisis, technological disruption, unemployment, overuse of planetary resources and loss of direction in a globalised world, numerous symptoms explain these concerns and loss of confidence. But have we questioned the system within which we are evolving? Since the first Industrial Revolution, we have been functioning on the same development pattern. With the mechanisation, automation and now digitalisation of our economy, we believe that our model has somehow dematerialised and drifted towards a “service economy” and a “knowledge economy”. But even if we churn out more advanced products, the “old growth recipe of transforming natural capital into other forms of capital still plays a huge role in our economic growth”. As labour and capital been regarded as the two main inputs, resources and energy have been perceived as results of growth and not as driver. Failing to recognise this leads to an “undermanagement” of natural capital, and to “under-reacting” to the threat that the depletion of natural resources poses to our future economic success. This crucial point is summed up by the authors in a very clear question:  “If growth is to an important extent built on natural capital, and that capital is being depleted, then what will that do to our economy?” In other words, the costs of our economic model have now started to outpace the benefits. We’re living off the capital, and not the dividends.

Therefore the demand for a system reset is louder than ever, and there is “massive opportunity at our fingertips”. These opportunities, stress the authors, need a new narrative. Technological disruption is part of the answer, but it is crucial to define a set of principles and boundaries to make sure the opportunity is turned into a good disruption, rather than remaining unguided and potentially taking a negative path, argue the authors.

The transition that lies ahead does not only rely on a resource-productive economy but on a “planet-positive system with a completely different dynamic based on a new set of accepted norms”. Throughout the book, the authors make proposals for new design principles towards a systemic change and emphasise the need for “real leadership instead of management.” Their plan of action is based on three main building blocks: “abundant sources of renewable energy, a cradle-to-cradle material bank and a high–productivity positive industrial system built on circular and regenerative principles”

In this book, Martin Stuchtey, Per-Anders Enqvist and Klaus Zumwinkel have gathered factual evidence to describe the current situation, and take the reader on a journey to comprehend why we have arrived at a tipping point, or as they put it, “a new departure point”. Since the beginning of their work on a better and more circular use of resources that lead to a report launched in June 2015, they  have witnessed the emergence of new sources of growth triggered by technology and new business model that are already at play in multiples sectors such as mobility, agriculture, and cities. And there is only one conclusion they can come to: “We, the authors of this book, could not think of a more exciting, more rewarding and more deserving time in which we live.”

This book paint a comprehensive picture that does not answer all the questions but gives the keys insights to move towards an alternative growth model based on a necessary redesign of our economy. The authors, with eclectic background and 46 collective years at Mckinsey and Company, can claim a solid knowledge of the economic issues. Their common vision has lead to this inspirational publication, extremely well written and rich in many case studies. It is a must-read for everyone eager to understand and unlock the mechanism towards a new economic prosperity.

A Good Disruption: Redefining Growth in the Twenty-First Century