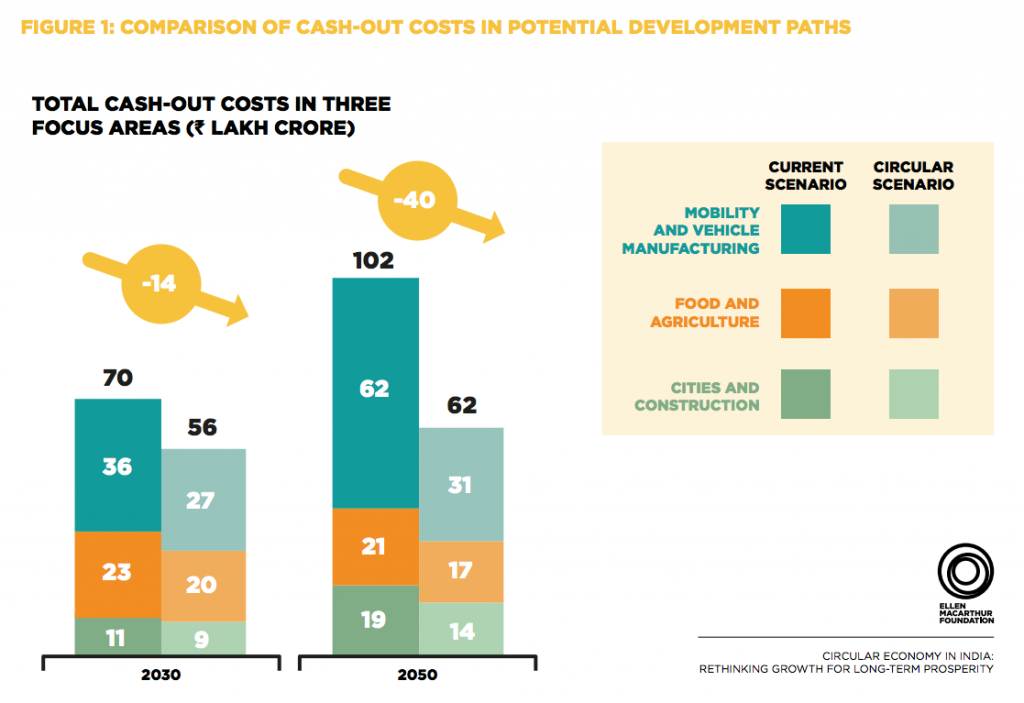 Today sees a milestone in the international understanding of the potential and benefits of a circular economy, with a new report from the Ellen MacArthur Foundation that looks specifically at India. Circular Economy in India: rethinking growth for long-term prosperity has been produced with support from ClimateWorks and UNCTAD, and focuses on three areas key to the Indian economy and society: cities and construction, food and agriculture, and mobility and vehicle manufacturing.

The study finds that a circular economy could bring annual benefits equivalent to US$ 624 billion in 2050 compared with the current development path – a benefit equivalent to 30% of India’s current GDP, through reduced material costs and increased profits for businesses. This could be achieved mainly through better product design, innovative business models and reverse logistics, and the report includes numerous case studies of examples already in the market. Such significant economic benefits are a good sign, but perhaps won’t be a surprise to readers of existing economic analysis on the circular economy.

Yet in the Indian context, the circular economy proposition is quite different. Whereas studies such as 2015’s Growth Within: a circular economy vision for a competitive Europe illustrated a path to rediscover more productive growth based on the principles of a regenerative and restorative model, with India it’s not that there’s a lack of growth. In the past decade, the country’s economy grew at an average of 7.4% a year. However, this growth comes with negative externalities, and it’s in this area that the circular economy could have a profound impact.

Circular Economy in India finds that through implementation of circular economy principles, India’s greenhouse gas emissions could be reduced by 44% in 2050, helping the government reach its targets set in Paris last year. Other negative externalities that could be mitigated include the use of virgin materials, water and the consumption of synthetic fertilisers and pesticides.

The development of a more circular economy could also directly benefit India’s growing population – estimated to be 1.7 billion by 2050. The report suggests that a smarter mobility system, regenerative farming methods and digitally-enabled sharing solutions could mean cheaper products and services, reduced congestion and increased disposable income for citizens.

But what about the ‘leapfrog opportunity’? This prospect is often part of the conversation when low and middle income countries explore the circular economy. Circular Economy in India presents a more nuanced case in this regard, illustrating how India can avoid becoming locked in to a linear, throughput way of doing things by reinforcing current circular activities. One example is car ownership: with only 2% of the population owning a car, there’s the chance to offer a safe and convenient mobility model without tearing people away from existing private car ownership, one reason for inertia in more developed markets.

With incredible growth in recent years, and much more ahead, adoption of circular economy principles now could set India on course for a competitive advantage over more mature economies, as well as a safer, more prosperous future for those 1.7 billion people.

Find out more about the report and download the free PDF at the Circular Economy in India microsite.